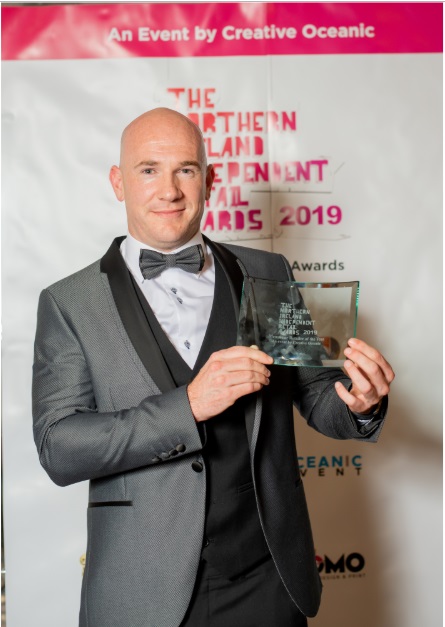 The second Northern Ireland Independent Retail Awards 2019 saw local entrepreneurs rewarded for their achievements over the last year. The awards were held in the Crowne Plaza Belfast Hotel, on Thursday 22nd August.

The awards honoured hard-working Northern Irish individuals who demonstrated the entrepreneurial spirit and business acumen to service a thriving industry. According to Indie Retail, for every £1 spent with a local, independent business, between 50p-70p circulates back into that local economy. For this reason, it is important to support local independent business and to pay homage to independent retailers for servicing and enhancing local communities.

CityMan, Londonderry was in attendance at the award ceremony where it was announced to their delight, they had won Menswear Retailer of the Year.

Collecting the award was CityMan manager Bryan McCandless who said “We are ecstatic to have picked up the award, there were some fantastic finalists, so to have been picked as the winner is incredible. I just want to thank all of our loyal customers and staff as this wouldn’t be possible without them.”

CityMan, based at 18 Waterloo Place in Londonderry is owned by David McCandless and managed by his son, Bryan. David had this to say about the awards; “Independent retail is very important to the identity of any city so we were pleased to go along and celebrate local independent retailers of all shapes & sizes. Winning the award was merely the icing on the cake”.

This isn’t the first prestigious award that CityMan has won, having been crowned Groomswear Supplier of the Year at the Northern Ireland Wedding Awards 2019 earlier this year. Bryan stated: “Groomswear is a large part of our business so were very pleased to win that award, but as a general menswear store catering for all occasions, it was nice to have our hard work rewarded in the general menswear category this time around.”

Awards Organiser Irfan Younis said: “Congratulations to all winners and finalists at the 2nd Northern Ireland Independent Retail Awards 2019. We were delighted to host such exceptional and hardworking people who make such brilliant role models and are leading a new generation of small business owners to success. We’re excited to see what next year holds and to watch how the campaign evolves over the years.