With a backdrop of a “gloomy” global economic outlook, Ulster Bank‘s Chief Economist Richard Ramsey takes a close look at the impacts on the NI economy. Several shocks have hit a world economy already weakened by the pandemic: higher-than-expected inflation triggering tighter financial conditions; a worse-than-anticipated slowdown in China; and further negative spillovers from the war in Ukraine have all impacted our own economy significantly.

All of us are battling against rising energy costs, costs of doing business, interest rates and inflation; navigating the trends and deciphering the data on this webinar will give businesses opportunity to plan ahead. Join our webinar where Chief Economist Richard Ramsey will provide the Economics overview and future outlook for Northern Ireland and Regional Ecosystems Manager John Ferris will discuss how entrepreneurs can make best use of the extensive ecosystem and support network across the North West.

Anna was appointed Interim Chief Executive of the Londonderry Chamber in March 2022.

Anna re-joined the Chamber team in February 2020 and worked closely with outgoing CEO, Paul Clancy, to support and inform members throughout the Covid pandemic. She previously worked with Chamber as Events Manager from April 2013 to July 2015 and spent the intervening years working in various membership, trade and awarding bodies, including BritishAmerican Business, the American Chamber in London.

Prior to 2013 Anna ran her own food business producing delicious ready-made cooking sauces for sale throughout Donegal and owned the award-winning Rusty Nail Pub and Restaurant in Clonmany for some years with her husband.  She also had sales and marketing roles in a number of Inishowen hotels. 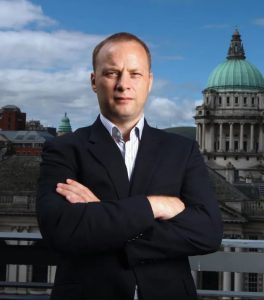 Richard Ramsey is Chief Economist, Northern Ireland, at Ulster Bank. He is a member of the Department of Finance’s Statistics Advisory Committee. Before joining Ulster Bank, Richard spent 10 years in the public sector – including spells as Principal Economist at the Department of Enterprise, Trade and Investment (DETI) and with Invest NI. He also held a number of economist posts within the Department of Finance & Personnel. Richard is a graduate of Loughborough University with a BSc in Economics & Human Geography and an MSc in European Economics and Finance.

Richard is a well-known face and voice in Northern Ireland, commenting on a range of economic and business issues including the housing market, the labour market and the performance of the private sector. He also runs the UlsterEconomix blog www.UlsterEconomix.com where you can find his commentary and research and tweets at  @Ramseconomics

John spent his early career coding for a healthcare tech company in Pittsburgh before a 15 year stint in media. A journalist and editor at the North Belfast News, John also ran Ireland’s most successful independent food website, Forked.
In 2013 John launched a wi-fi software technology start-up, which was used in restaurants, cafés, hotels, stadia and vehicles around the world.
John joined Entrepreneurial Spark in 2015 to help support ambitious start-ups throughout Ireland. The social enterprise was bought over by NatWest, RBS and Ulster Bank in 2018. Since joining the team John has worked to support 7000+ start-ups across the country. Those businesses have raised £35m+ in investment and created more than 1000 jobs.

Register here for our Teams Webinar

Online bookings are not available for this event.